Top Places To Visit In Bikaner

Top Places To Visit In Bikaner– A cultural refuge and haven for travelers, Bikaner. This city will entrap you behind its walls, captivate you with its breathtaking scenery, and wow you with its illustrious past. Bikaner will beckon you back time and time again because there are so many wonderful locations to see there. Let us discuss the Top Places To Visit In Bikaner. 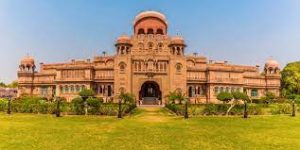 Bikaner, which is easily reached by air, rail, and road, is home to many tourist attractions that will delight history and culture fans. Here are some necessities to assist you to organise your trip to Bikaner before we go on to the city’s major tourist attractions.

Frequently Asked Questions about Top Places To Visit In Bikaner

What is renowned in Bikaner?

The handicrafts, leather goods, and beautifully carved jharokhas of Bikaner are world-famous. In addition to this, the location is also known for having Asia’s largest camel farm.

What is the Best Time To Visit Bikaner?

There is never a bad moment to learn about Bikaner’s ethnic culture and history. However, the winter season is the greatest time to visit Bikaner because of the lovely weather from October to March. Then there is the annual Camel Festival in January, which draws more tourists at this time of year.

Top Places To Visit In Bikaner

Here are some of the Top Places To Visit In Bikaner. Hope you find it helpful for your next trip!

The British architect Sir Samuel Swinton Jacob constructed the Laxmi Niwas Palace, the former home of Maharaja Ganga Singh of Bikaner, between 1898 and 1902 in an Indo-Saracenic style. One of the most visited locations in Bikaner is the beautiful red sandstone building. The Golden Triangle Fort & Palace Pvt Ltd now manages the palace after it was transformed into a hotel.

One of the most fascinating places to see in Bikaner is the undefeated and unconquered Junagarh fort, which still stands tall and tells tales of a magnificent past. This fort is a rare example of its sort thanks to the inventive fusion of Gujarati and Mughal architecture. Photographers have several choices to capture it because of its towering majesty and lovely surroundings.

The temple deserves to be included on the list of attractions in Bikaner. Due to a shortage, it was constructed in 1907 on the third day of the light half of Falgun Samvat. There were not many temples dedicated to Lord Vishnu and Lord Krishna, two of Hinduism’s most powerful deities. The queen of Maharaja Ratan Singh Ji was a great devotee of Lord Krishna, and her husband was inspired to build a temple in her honor. As a result, it might be seen as a sign of affection and respect.

The Kote Gate, which separates the modern city of Bikaner from the old city, stands tall like a guardian to the city and serves as its primary entrance. This location is a fusion of modern urban civilization and historic forts and monuments. Local shopping is this location’s main draw. This market offers a wide range of products, including handicrafts, traditional attire, kitchenware, art made of camel hide, and traditional open-toed shoes. This location will thrill you with its abundance of dining options in addition to its shopping. Additionally, this location is surrounded by some of Bikaner’s top shopping areas.

At the Thar Desert, explore the wilderness in the center of the desert and take in the breathtaking splendor of the sand ocean. Every visitor to Bikaner should go on a camel safari. You can experience nature in its most basic form while taking advantage of the excellent facilities offered by the organizers.

Bikaner is renowned for its grand Havelis and homes that include elaborate carvings and jharokhas that resemble actual palaces. Rich Bikaner merchants built the Havelis at Rampuria. You can travel back in time hundreds of years by taking a stroll around the haveli’s lanes. So, when considering the greatest locations to visit in Bikaner, skip this location.

Bikaji Ki Tekri, the first fort in the city of Bikaner, is one of the most popular tourist destinations in Bikaner. The oldest building in Bikaner, built by Rao Bika, is thought to be about 500 years old. A significant portion of the fort’s architecture is made of red sandstone or Dulmera stone, which is particularly intriguing. If you go down to the basement, you’ll uncover a maze of chambers connected with puzzle pieces.

One of the most daring tour operator businesses is called Himalayan Rider, If you are looking forward to a trip to Rajasthan, we, along with several others would suggest you give Himalayan Rider a try. Offering travel-related services to customers, whether they are domestic clients or clients abroad, is the company’s main goal and concern.

Benefits of choosing Himalayan Rider include: